Day 2 we were up early and down for the buffet style Mallorcan breakfast. Most of the walkers departed before us but we were soon on our way.

Our heavy panniers weren’t going to make this an easy day.

This was going to be a MASSIVE climbing day.

First, we dropped down to the Port de Soller harbour before starting the 12 miles climb (strava cat 2). As you can imagine this went on forever but the views down to the valley on our right with smoke slowly drifting up from chimneys (windless) was charming. We climbed up, passing Fornalutx below us to our right. We must have been ¾ up the climb and suddenly, as we were passing an old VW camper van one of the occupants came out with a bowl of fresh pineapple on a fork prepared to shove it in our mouth as we rode. We couldn’t resist to stop, thank them for their wonderful gesture, accept some pineapple and take their photos. It was 2 German guys and a Swiss girl who had slept there with the stunning views down towards Port De Soller.
We left them and climbed until we reached the Tunel De Monnaber cutting straight through the mountain. Once we emerged out the other side it would signify the top of our climb at 2900 ft. 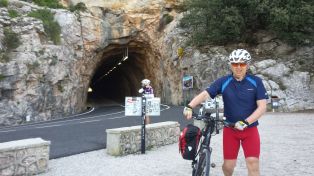 Once out the other side we would soon pass 2 reservoirs, Embassament De Cuber followed by Embassament Del Gorg Bleu where we stopped to take photos.

Carrying on we came to the junction which signified the start of the Sa Colabra descent. The café was overrun with all the roadies on their lightweight carbon bikes who had either climbed and now recovering or, like us going to start the 7 miles descent to the beach. 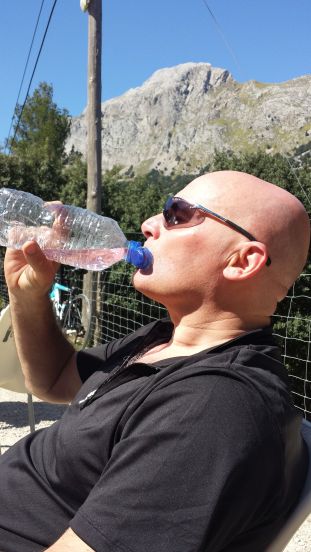 Hydrating before the descent to Sa Colabra

We had a plan: Have something to eat and drink at the café and ask if we could leave our panniers at the café awaiting our return. It worked a treat so once we had consumed our lunch, stashed our panniers and we made our way up the shortish climb which is actually the top of the Col De Reis climb. From this point it’s 6.2 miles down to the bottom which didn’t take long . As I was descending watching some of the riders struggling back up I couldn’t help thinking we might have been a bit ambitious to tackle this along with the 12 miles climb we had already done that day from Port De Solller.

Once at the bottom there are a few overpriced restaurants (captive audience) and hundreds of lycra clad  roadies waiting to start their ascent.

Instead of heading straight back up we headed past the restaurants and punters to the walking (lit) tunnel (we pushed the bikes through) which pops you out at a very quiet shingle beach with stunning mountains and cliffs, Torrent De Pareis  – everyone should go visit. It’s only 200m after turning right once you get to the bottom of the descent.

Then the inevitable, the CLIMB of Col De Reis (strava cat 1) !!!

John takes his helmet off when climbing. It was particularly hot this day but I felt good to climb. We set away and it was head down for the next 6.2 miles . I’d stop to look down the switchbacks to ensure John was still making progress (which he was) then press on. Some of the climb is steeper than the rest but as long as you aren’t trying to break any records then it’s doable. I made it up in 1-40 and waited for a few mins for John for our photoshoot at the 682m sign. John’s quote “I was in a dark place a few times there”. Due to the oppressive heat he had ended up dunking his head into a water trough in an attempt to cool off.

We left, picked up our panniers from the café and there were a few undulations, passing Lluc on our left before the big descent down to Pollenca.

We soon located Refuge Pont Roma just around the corner from the Roman bridge which was coincidentally next to the café Pont Roma (which I had researched looking for traditional Mallorcan Fayre) where we had chosen to have our evening meal and breakfast next day. 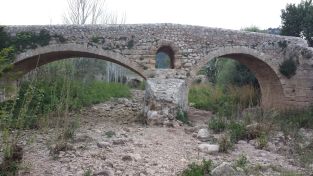 We checked in to the refuge and ordered a couple of beers before going into our mixed dorm which was at capacity. There were girls running around wrapped in towels to the showers – it was like a carry on film 🙂
Showered and out for our traditional meal we also climbed the 365 steps in the dark to the Calvary before returning for a well deserved early night despite some of our room mates being up for a party.

Checkout our day 2 slideshow (will open in new page)