Despite the long day yesterday I woke fairly early so went outside to catch the sunrise. It was a beautiful morning with light cloud and only the sound of birds and the donkeys grazing to break the silence.
You can see why the Moors chose this location to build a castle, in fact the Arab commander was able to hold the castle for 2 years after the Christian conquest. There is a Chapel on the site built in 1622 by Father Coll, rector of the Parish of St. Bartholomew, as a token of appreciation for the arrival of rain after a long drought. It was occupied by several hermits until the late eighteenth century.
As today was to be a shorter day I persuaded Nigel to join me on a short walk (in the complete wrong direction – NB) to the Cova de San Antonio which had caught my attention on the map. 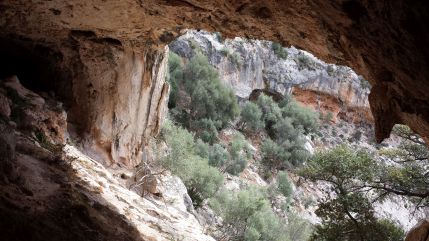 The cave was accessed via a smaller natural opening which we almost missed and only spotted as we had decided to explore a tower built on the cliff which part of the castles defences . We crawled through and were amazed when it opened out into a huge cavern. There was a cistern created to catch water which dripped through the roof of the cave which is supposed to have been used by the occupants of the tower. There was also a small niche which could have been a shrine. The cave is also supposed to have been the residence of a hermit , it appeared popular with the local goats judging by the amount of droppings about. Having got the cave out of our(my) system we packed, said goodbye and set off to see if our bikes were still there . We descended  through the fortifications of the old castle and onto the  footpath to the clearing to be reunited with the bikes – phew. We had originally planned to cycle back down into Alaro and head into Palma via Inca but we had been studying the map and decided to push our bikes down a footpath (impossible to ride) the other side of the mountain to arrive at the top of the Col de Orient and cycle back via Orient and Bunyola. It was on the descent that Nigel had our only mechanical issue of the trip. What appeared to be a slow puncture was quickly sorted by pumping the tyre up which strangely didn’t deflate again but ended up not sat in the rim properly but got us back to Palma ok.  We ended up on a very popular route with the roadies, the climb up to the Col de Orient is a cat 3 and the climb up to the Col de Honor , which we did,  is a cat 4 so more Strava trophies to be bagged.
After the Col de Honor climb it was downhill to Bunyola where we stopped and picked up some local delights from a small patisserie and sat in the square with what seemed like 200 roadies for lunch. We enjoyed the sunshine and chatted to a gentleman we had met on Sa Colabra who was very complimentary of our efforts. With only 10 miles to go we carried on effortlessly to Palma straight to our Hotel, Hostal Bonany to drop our bags off as the it would be a 25 min walk from the bike shop once we had returned them.
We still had time to do a bit of cycle sightseeing round Palma including the Cathedral, Parc de la mar, the Placa major and the Gaudi building before getting split up as I cycled away down the alleyways as Nigel stopped to take (yet more) photos.

We reunited at the bike shop and sadly surrendered the bikes to become pedestrians for the walk back to the hotel. We didn’t get far when we fell to the temptation of a cold beer at Bar Nou terminal which seemed popular with some expats and a colourful local character who wouldn’t have looked out of place in a bar on Gateshead high street. We dined that night at Sa Premsa which was recommended by an expat who was resident in our hotel. It was as described, very Mallorquine with authentic dishes  in a bier keller style. The walk back to the hotel was an eventful episode as I decided to ring my darling wife who thought it most amusing trying to navigate us through the back streets of Palma ,  I`ve no idea how we found our way back.